The Alarm app in the latest InfiniTime update! The latest version of the InfiniTime 1.5.0 Huckleberry software for the PineTime smartwatch appeared a few days ago. This is very good news as many users have asked for an “alarm clock” feature.

The new application, which appeared mainly thanks to mruss77, allows you to specify the time at which the alarm should be triggered, as well as to specify on which days it should be triggered (only once, every day, weekday). It also displays when the next alarm is triggered.
As the developers say, this is the first version of this app and we have already identified many features that could be added in the future, such as handling multiple alarms and keeping settings after a reset.

The handling of vibrations for notifications has also been improved by Riksu9000 the button in the quick actions menu now only toggles vibrations on notifications, while still allowing other apps (Metronome, Timer and the new Alarm app) to enable the vibrations.

InfiniTime is now able to recover the time after a reset! This quality of life improvement, added by geekbozu, stores the date and time in a spefific area in memory that can be recovered after the reset. This way, you won’t have to re-sync the time with your phone each time your reset your watch (to workaround those annoying BLE issues, for example).

Talking of BLE, evergreen22 improved the adertising strategy, which should improve the connection and reconnection reliability between your watch and your phone. In Bluetooth Low Energy, a BLE device advertises (announces) itself by broadcasting a small message with various info about itself. The other devices are then able to detect your watch by listenning (scan) for those messages. These changes improved the advertising strategy by following state of the art recommandations.

The battery level monitoring have also been improved by Riksu9000. The measurements should now bit more consistent and reliable. 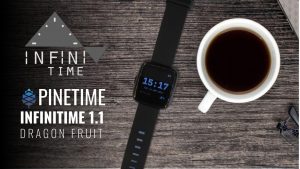 InfiniTime 1.1 Dragon Fruit: new apps and many other improvements 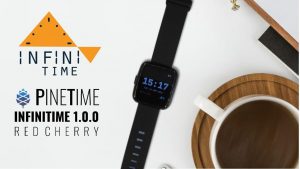